Dare you visit the world´s most haunted island?

SEE THE DARKER SIDE OF WIGHT

By day the Isle of Wight is a place of sunshine, spectacular countryside, beaches and great sports and leisure activities. But it has a darker side too. For it is also known as Ghost Island, the most haunted island in the world! 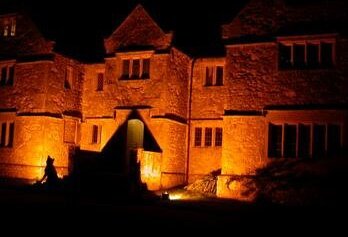 This small island is home to hundreds of ghosts and spooky happenings. There are all sorts of Isle of Wight ghosts - from phantom monks, grey ladies and poltergeists - to the shades of smugglers, soldiers, Royalty and Romans. There are ghostly murderers and their victims, ghost-ships out at sea, and even a ghost-train still running on long vanished rails. The Most Haunted team including Derek Accorah, Yvette Fielding and Richard Felix paid a visit to Ghost Island in 2005 to film two programmes of Most Haunted, and their amazing experiences at Arreton Manor and Appuldurcombe House can be seen on Living TV. With the Island´s rich historical heritage, its violent and colourful past, it´s not surprising that ghostly goings-on and haunting echoes of those turbulent times continue to reverberate through 21st century. Hundreds of unquiet and restless Isle of Wight ghosts have been reported here in hotels, hospitals, manor houses, pubs, shops and offices, while the spirits of smugglers and shipwrecked seamen walk lonely West Wight beaches. 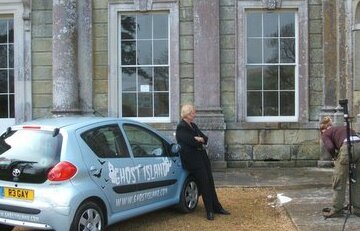 As a holiday activity with a difference, why not try your hand at ghost hunting? It´s sure to be a hit with the kids, and what´s more, its free! Ghost hunting is also a good way of exploring the Island and learning more about its fascinating history. 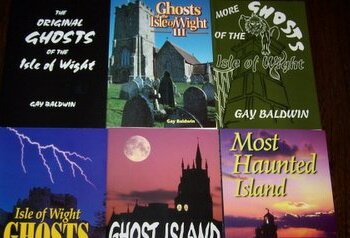 So here are just a few spooky haunts to try. Please heed this warning: If visiting churches or graveyards, please behave appropriately, and if ghost-hunting at Knighton Gorges, remember the land itself is privately owned, although the site can be seen from the road and public footpath. APPULDURCOMBE HOUSE, Wroxall This handsome haunted mansion with its 365 windows and 52 rooms is now a shell of its former self. The ghosts however, remain. They include a phantom carriage, brown-clad monks, dark shapes glimpsed flitting through the grounds. A baby´s cry is heard, and unseen hands regularly leaf through pages of the visitors´ book. KNIGHTON GORGES, Newchurch 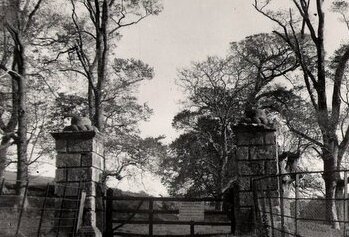 Known as the Island´s most haunted place, every New Year´s Eve, people gather to wait for the ghostly house to re-appear. A pair of weathered stone gateposts are all that remain of the manor house of Knighton Gorges, yet it lives on, its blood-red history a testament to murder, suicide, insanity, malice, and a gallery of ghosts. A coach and horses, poltergeist lights, phantom revels and tales of stone creatures seen upon the gate pillars are just a few of the spooky happenings in this strange place. 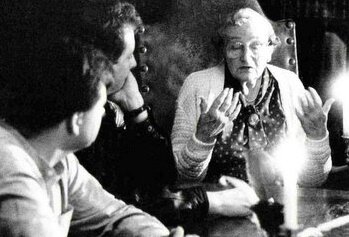 A brutal family murder and a young girl pushed from a window to her death are at the heart of the hauntings here. A little child in a blue dress is regularly seen and heard, crying "Mama Mama". Other regular visitors are ghostly monks, whose grave chanting is heard, while the figure of a woman wearing a cherry-red gown has also been seen. 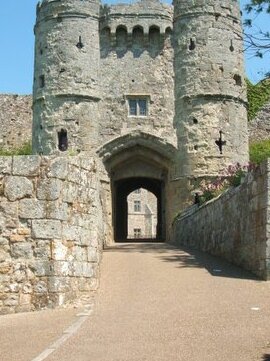 For more than nine centuries it has stood firm against attack, but within its walls, ghosts roam. In the famous well house where donkeys work the wooden tread wheel, the face of a dead girl who drowned in the160ft deep well, has been seen. A mysterious cloaked figure, with four dainty lap dogs, walks the castle grounds. Other phantoms include a Victorian lady in grey and tragic Princess Elizabeth, daughter of King Charles I, who died a prisoner here.

HARE AND HOUNDS
Arreton Murderous woodcutter Micah Morey who killed his young grandson in cold blood in 1737, was tried and hanged, and his corpse left rotting on the gibbet at Gallows Hill, near the Hare and Hounds, until it became ´an offence to eye and nostril´. The gibbet crossbeam, complete with a notch cut in it beside the date of his execution can be seen in the pub. Morey´s restless spirit can also be seen, roaming Gallows Hill, carrying a large axe...

VENTNOR BOTANIC GARDEN, Ventnor
For almost a century, the world-renowned chest hospital Royal National Hospital specialised in treating the killer disease, tuberculosis. When the half-mile long building was demolished in 1969, the site was transformed into gardens. The hospital was haunted long before this, and even today long-dead patients are still seen and heard. Ghostly weeping, groaning, and smells of ether are reported. A sickly, consumptive-looking ghost, and phantom nurses in old-fashioned uniforms walk the gardens.

THE PUB THAT VANISHED
You may never find this one, but have fun trying! One dark November night, two Island men set out from Newtown, on what became the strangest night of their lives. They came upon a pub - the Falcon or the Vulcan - where they shared a drink with some unsociable spirits. The drab bar felt unwelcoming and cold. Hostile eyes turned towards the two strangers and all conversation ceased. They drank up quickly and left. The strange old-fashioned pub, which was along a narrow lane somewhere between Newtown and Calbourne, has never been seen again. Despite repeated attempts, neither the lane nor ghostly pub has ever been found.

Just why there are so many ghosts on the Isle of Wight is a mystery. Some say it´s because of powerful unseen energy or ley lines which run under the Island. Journalist and local author Gay Baldwin has been investigating and researching ghost stories for over thirty years. Her series of Isle of Wight ghost books, video, DVD, audiobooks, and ghost hunters´ guides top the Island´s best-seller list with over 100,000 copies sold. The books, maps and video/DVD are all on sale at Island book shops, Tourist Information Centres and you can also order on-line at www.ghostisland.com.

In 1993, Gay devised the popular Newport Ghost Walk - a spooky stroll around the old town with a supernatural slant, which has introduced thousands of Islanders and visitors to the darker side of Newport.

Led by professional storytellers in Victorian costume from the Isle of Wight Ghost Experience, the walks leave St Thomas´s Square, outside the haunted Wheatsheaf Hotel at 8pm on Wednesday nights. There´s a new route every year and you can buy tickets on the night or book in advance at any of the Island´s Tourist Information Centres for the walks, which take approximately one and a half hours.

You can also try several other walks throughout the year, such as the Botanic Garden in Ventnor, Cowes Old Town, Ghosts of Godshill, St Catherines Lighthouse in Niton (including supper), Arreton Manor Grounds and Freshwater Bay. All walks are subject to availability. If wet, do dress appropriately. Call 01983 520695 or check www.ghost-tours.co.uk for prices and details.

Although better known for sailing, Cowes also has more than its share of haunted places. Why not try the Old Cowes Ghost Trail, a free, self-guided tour around the streets and alleyways of the town. Starting from The Parade, the circular walk includes more than a dozen spooky haunts, including several inns and pubs, where spirits of all kinds can be found. It’s available as a free download from Gay Baldwin’s website at www.ghost-island.co.uk where you can also pick up tips on ghost-hunting and learn about more of the Island’s haunted places to visit. You can also submit your own ghostly experiences and check for regular updates and new stories.

Gurnard Pines
AUTUMN BREAKS & OCTOBER HALF TERM Why not catch the last ...