Public Transport on the Isle of Wight

Getting around the Isle of Wight is easy, with the quiet roads and attractive countryside making driving an unexpected pleasure. If you´re travelling to the Island on one of the ferries as a foot passenger, there´s a good choice of public transport to get you to your chosen destination. The Isle of Wight is well served by the public transport system, which includes a good network of buses and trains.

The main bus company on the Isle of Wight is Southern Vectis, who run an extensive bus network that covers most of the Island. Buses meet Wightlink FastCat arrivals at Ryde and ferry arrivals at Yarmouth. The company offers a popular and flexible Rover Ticket range for individuals, families and small groups, giving passengers unlimited travel for 1, 2, 7 or 28 days. For great views of the Island, hop aboard one of the Open Top Bus Tours, which include The Needles and Sandown Bay. These operate seven days a week, with regular departures throughout the day. The open-top buses give a birds-eye view of the Island´s top locations and a special commentary gives information about places of interest and the history and geography of areas along the way. English residents over 60 and eligible disabled residents can get free travel any time, any day on all Southern Vectis bus routes and open top buses. For information on timetables and services, phone: 01983 532373 or visit: www.islandbuses.info 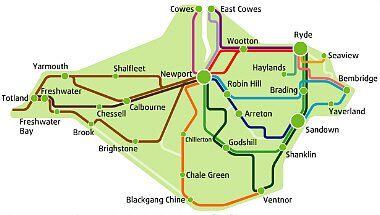 The Wightbus service connects Ventnor with Island Line trains at Shanklin, Railway Station. Some buses stop at Ventnor Botanic Garden, St Lawrence and Bonchurch. Wightbus also operates a number of registered local bus services available to the general public over a variety of routes. The service operates throughout the day Monday to Saturday, plus a Sunday service from Easter through to late September.

Isle of Wight Trains
The 8½ miles of passenger railway on the Island is operated by Island Line Trains, on a route serving Shanklin, Lake, Sandown, Brading, Smallbrook Junction and Ryde Pier Head (where there is a connection with the Wightlink high-speed catamaran service from Portsmouth Harbour). It is one of 26 train companies that form the UK´s National Rail Network. The actual rolling stock consists of lovingly cared for ex-London Underground trains and they operate from early morning (starting around 6am) until after midnight. Throughout most of the day, there are two trains an hour. The company has a wide range of ticket types. Phone 812591 or visit: www.island-line.co.uk for details. 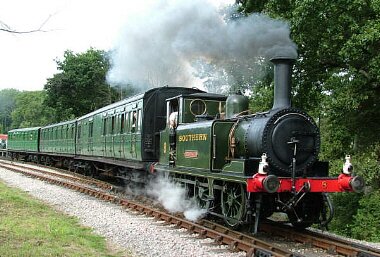 Isle of Wight Steam Railway
If you´re a steam train buff, then the Isle of Wight Steam Railway is an absolute must. With grand old locomotives pulling wonderfully restored Victorian and Edwardian carriages, the trains travel along a five-mile route from Wootton, through Havenstreet and Ashey, to Smallbrook Junction, which is the interchange with Island Line Trains (see above). Tickets are valid for unlimited travel on the day of ticket issue, so you can ride as often as you wish. For more information, phone 01983 882204 or visit: www.iwsteamrailway.co.uk (Talking Timetable Service: 01983 884343)

Cowes Chain Ferry
There is a chain ferry (also known as the floating bridge) for transporting foot passengers and vehicles across the River Medina from East to West Cowes and vice versa. For further information including current crossing times and prices, contact the Ferry Manager on 01983 293041.

Isle of Wight Taxis
There is a large selection of taxis to choose from, with over 60 taxi companies operating on the Isle of Wight.