Red squirrels are the only squirrel native to the British Isles. They are disappearing from the mainland fast and are being replaced by the introduced American grey squirrel. The Isle of Wight is an important stronghold as the Solent provides a barrier to grey squirrels. However, a grey does find its way to the Island sometimes, so we need to be vigilant. There are contingency plans for dealing with greys that arrive on the Isle of Wight. Not only do grey squirrels outcompete reds; they also carry the deadly parapox virus, which is fatal to the reds. It is illegal to bring a grey squirrel into red squirrel territory. The penalty is two years imprisonment or a £5,000 fine. It is also illegal to release a grey anywhere, once it is caught. 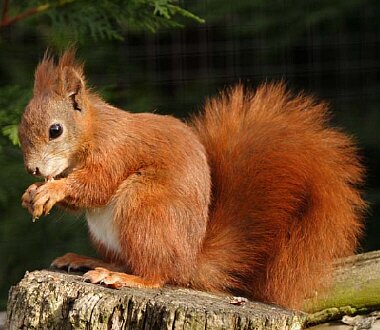 The Isle of Wight’s woodland can provide habitat for around 3,500 red squirrels. Numbers fluctuate annually according to the success or failure of the autumn seed crop. They also fluctuate seasonally when young are born. Reds on the Island live mainly in broadleaved woodland - which is unique nowadays as greys dominate this habitat on the mainland. The Island is also free of deer, which nibble young shoots and retard re-growth of under-storey trees.

What They Need to Survive

Trees
Reds not only need trees to live in and feed from, but also they are essentially an arboreal animal who would prefer to travel via trees rather than the ground. This means that ´corridors´, or ´squirrel highways´ are very important to them. Tree species preferred by reds are hazel, wild cherry, sweet chestnut, walnut, Scots pine, Corsican pine and beech.

A grey squirrel free zone
to live in, such as the Isle of Wight. The Island is a nationally important stronghold for our fast disappearing native red squirrel.

Support from humans
Many people feed squirrels in their garden. Although squirrels may cost a fortune to feed when they are at their hungriest in the spring and summer and are termed as ´time wasters´ because they are charismatic to watch - they are also considered well worth it! Also, we need to continually fight development, which encroaches into woodland and over zealous forestry work. It is, I´m afraid very much a case of some you win and some you lose! 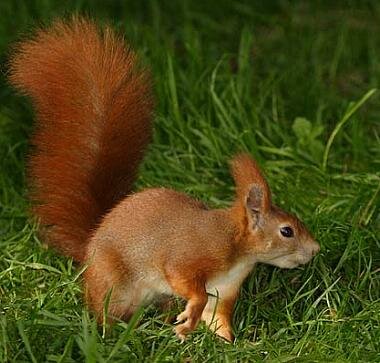 Yarmouth
Yarmouth is the oldest town on the Isle of Wight. It is located on the coast ...

Sandown
Sandown is the premier seaside resort on the Isle of Wight. It can be found o...