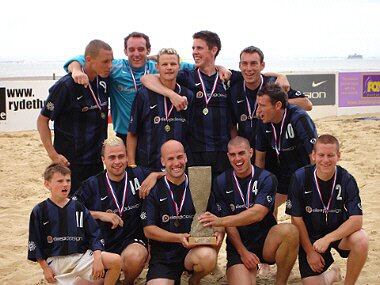 Sandown Sociedad Beach Soccer Club, located on the golden sands of Sandown (on the southeast side of the Island) is the United Kingdom’s biggest beach soccer club. The team play in the EBSA Beach Soccer Championships and various other beach soccer events around the world. You can find them in the summer months playing on the golden beaches of Appley in Ryde on the Isle of Wight. 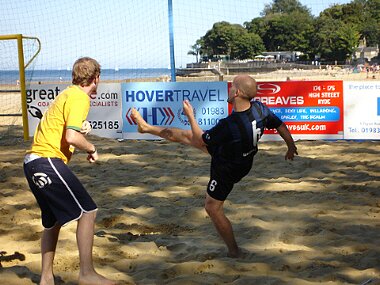 Sandown Sociedad has played a fundamental part in the growth of beach soccer within the UK and today has strong links with the EBSA (English Beach Soccer Association) and BSW (Beach Soccer World Wide). Sandown Sociedad Beach Soccer Club was founded in 2002 and since then has gone from strength to strength. In their first year they Won the FTP Division 2 IOW Beach Soccer League title, the Wight Crystal Charity Shield and were voted FTP Beach Soccer Team of the Year. Tony Kerr Won the FTP Golden foot scoring 48 league goals. 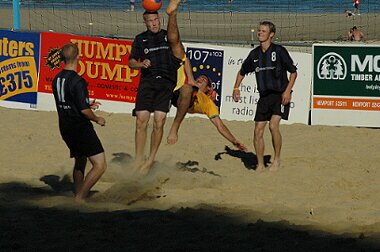 2004 saw the emergence of Sandown Sociedad Youth making Sandown Sociedad the Biggest Beach Soccer Club in the UK. They went on to do the double that year. Tony Kerr picked up the EBS Golden Foot in his first season in the Premiership aged 16. In 2005, Sandown Sociedad had three players selected for England and all three played in the EBSL in various European venues. With Manager Luke Kerr becoming an England coach and taking the England Team to Norway. 2005 also saw Sandown Sociedad become UK Champions and the youth side win the Championship for the second year running. 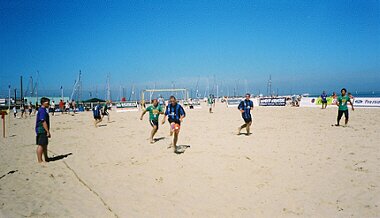 2006 saw Sociedad star striker, Jamie O´Rourke captain England in the EBSL and FIFA World Cup qualifiers. Jamie also scored two hat-tricks for England against Holland & Belgium. Luke Kerr as coach and O´Rourke and Breingan as players featured in England v Brazil in Durban, South Africa with the match being screened live on Eurosport to 92 countries. 2006 also saw Sociedad win the Hampshire FA Cup and become Premiership runners up once again.
Since 2003, eight Sandown Sociedad players have represented England on the International stage. Sandown have now established themselves as one of Europe´s biggest and best beach soccer clubs.

Brooke House
Please contact us for our car ferry inclusive holidays. Special Offers only a...