The Wight Bells were formed in 1998 and are based on the Isle of Wight, dancing in clogs in the North West tradition in denim pinafore dresses with multi coloured kick pleats and green shirts. We dance on a Thursday evening, practice in the winter and dance out during the summer season at local events and pubs and support the local branch of Marie Curie Cancer Care. 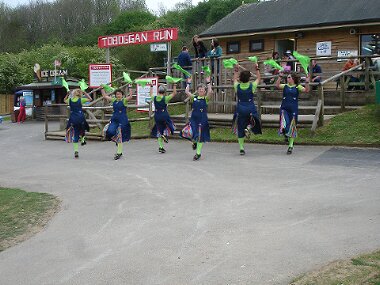 In 2002 The Wight Bells visited Bruges in Belgium to help the city celebrate as the European City of Culture. Travelling to Belgium via Eurotunnel, we entertained fellow passengers with our Morris dancing deep under the Channel. We also received a warm welcome at Ghent during our weekend away. 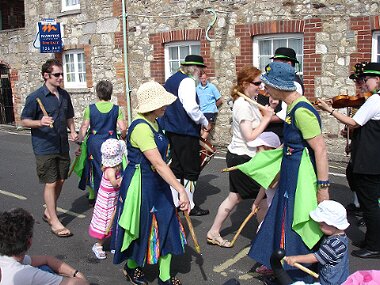 May 2006 saw us fly the UK flag for Morris dancing at the Saint Malo Folklore du Monde and the 50th anniversary of the Tall Ships Race with the Men of Wight, Oyster Girls and Island Cloggies. The Parade took place on the Saturday with international dance sides and ships crews taking part - very memorable. The ships slipped their moorings during the night and early morning to leave the international dance sides to hold their own parade and day of dance in the local park. 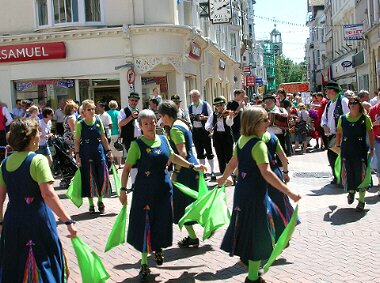 The Wight Bells enjoy our forays to the mainland to folk festivals in the South and are usually spotted at Weymouth and Swanage Folk Festivals. In 2007 it was decided to be a bit more adventurous, so we are off to Cleckheaton Folk Festival at the beginning of July. 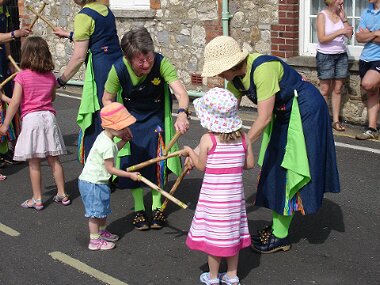