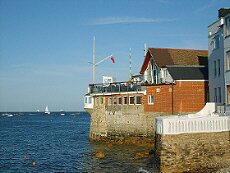 Sea View Yacht Club is the proud owner of a fleet of 13 keel day boats called Mermaids. This fleet is available to non-members to charter and has become a popular (if somewhat different) form of corporate entertainment. Mermaids are 7.92m (26ft) overall and displace 1.5 tonnes. Uniquely in the Solent, all the Mermaids are coloured differently, making them easily identifiable from the shoreline.

The boats take a helm and a crew of two. However, beginners eager to learn may make up a crew of four (the helm must always be qualified) and experienced sailors could get by with just a crew of one together with the helm. Normal rig is jib and mainsail, but in light weather, genoas replace jibs. In heavy weather, small mainsails are used. Within reason, charterers can choose what sail to use, but the Club reserves the right to restrict the use of genoas, spinnakers and/or full mainsails when the wind strength exceeds certain limits. In exceptionally strong winds or sea states, it may be necessary to abandon sailing altogether. While the rig is relatively simple, it is modern and the boats are responsive and fun to sail. Sea View Yacht Club stipulates that there must be at least one experienced person per boat - two outings in a dinghy is NOT considered enough! That said, the boats are not difficult to sail. However, winning races demands concentration and skill, the outcome being entirely dependent on the helmsperson and crew. The first fleet of boats was made in 1907. They were gaff rigged with a short bowsprit and quite a long counter.

A new class of Mermaid was built in 1922 and was replaced in 1963 with hulls made of cold moulded plywood. In 1994, Sea View Yacht Club decided to start a replacement programme, with the hulls of the new boats made of Glass Reinforced Plastic. There is no discernable difference in the performance of the boats in the fleet and thus competitive racing relies upon the skill and seamanship of the helm and the crew rather than the luck-of-the-draw. The Club can also be used as an excellent venue for corporate or private entertaining. Its enviable position on the north-eastern point of the Isle of Wight offers spectacular views of the Solent and the South Coast. All the sailing can be viewed from both of the Club decks, and the function rooms also look out over the water.

Yarmouth
Yarmouth is the oldest town on the Isle of Wight. It is located on the coast ...

Sandown
Sandown is the premier seaside resort on the Isle of Wight. It can be found o...