The Isle of Wight is renowned as the best location in Europe for finding dinosaur remains. The majority of dinosaur fossils are found along the south-west coast at Hanover Point, Chilton Chine and Brighstone Bay, with both bones and footprints evident at the stretch of beach from Compton Chine to Brook Chine. Dinosaur remains are also found at Yaverland, near Sandown. Not only were many of the earliest dinosaur discoveries in the world made here, but also Britain´s largest dinosaur dig, featured in the BBC documentary series ´Live From Dinosaur Island´, took place entirely on the Isle of Wight. At Sandown in August 2001, the first purpose-built Dinosaur Museum, Dinosaur Isle was opened, where many fossils and life size reconstructions of Isle of Wight dinosaurs are on display. 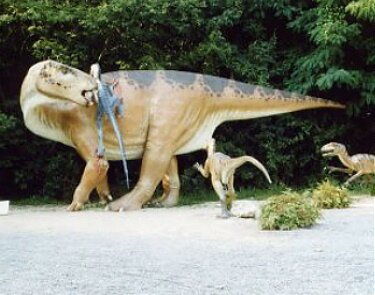 The reason why there were so many Isle of Wight dinosaurs is that about 120 million years ago it was an ideal habitat for them because the land was covered by rivers and ponds, so when they died, their bones became embedded in the mud and sand. This eventually turned to rock (known as Wealden rock) which was subsequently buried under more rock. These Wealden rocks were brought back up to the surface when the Alps were formed. About 10,000 years ago, the global rise in sea level cut into the English Channel and formed the Isle of Wight, and the Wealden rocks became exposed in the cliff by erosion. As the cliffs are eroded back by the sea, more and more dinosaur remains are discovered.

The most common of the Isle of Wight dinosaurs is Iguanodon (meaning ´Iguana tooth´), a plant-eater the size of a bus that used to travel in herds all across Europe. Nearly all the bones found on the Islands beaches belong to this type of dinosaur. There are actually two species of Iguanodon remains that have been discovered here - Iguanodon bernissartensis, the larger of the two, with a heavy, strong build and Iguanodon atherfieldensis, the lighter and probably faster moving variety. There are several types of dinosaurs found here that are only identified from one or two bones. These include the small Theropods Aristosuchus and Ornithodesmus and the Sauropods such as Iuticosaurus, Eucamerotus and Ornithopsis.

Sandown
Sandown is the premier seaside resort on the Isle ...