Walking on The Isle of Wight 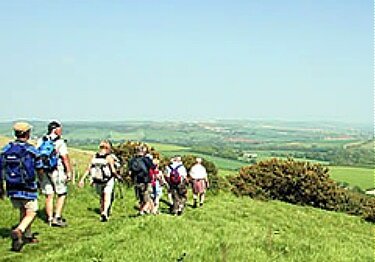 Walking on the Isle of Wight has always been a popular leisure activity and many people visit the Island just for the 500 miles of excellent public footpaths and bridleways, many being spectacular coastal paths and beautiful countryside walks. This is obviously a perfect setting for walkers and makes walking on the Isle of Wight, ?just what the doctor ordered?. Over 50% of the Island has been designated an ?Area of Outstanding Beauty? by the Countryside Commission, with about half of the coastline named as ?Heritage Coast? - an honour only awarded to the finest stretches of coastline in the country. In 1998 the Isle of Wight Council was the first authority in England to achieve the Countryside Commission´s National Target for Rights of Way. 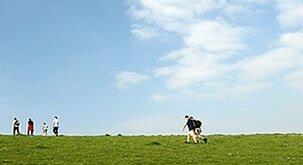 The unspoilt scenery here on the Island is so different, making walking on the Isle of Wight so diverse. There?s a surprise around every corner! For the best panoramic views on offer, take a walk on the downs, the highest point on the Island being St. Boniface Down at Ventnor, 770 ft. above sea level. The National Trust owns and maintains 10% of the entire area of the Isle of Wight, 17 miles of gorgeous coastline included, along with numerous areas of outstanding natural beauty. Their wardens offer guided walks in various locations where you can learn about the rare flora and fauna, not to mention taking pleasure in the splendour of the Island. 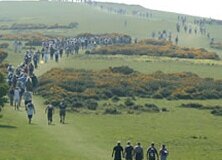 The Isle of Wight Walking Festival has been held on the Island every May since 1999 and is the largest walking festival in the UK. It is one of the most popular Isle of Wight events and attracts huge numbers to this holiday island from all over the world. The festival offers more than 100 guided walks which cater for all ages and abilities from experienced hikers to casual strollers. In 2004 the festival was awarded the Royal Seal of Approval by The Queen, who was visiting the Island at the time. She unveiled a plinth in St. Thomas Square in Newport to commemorate the sixth Annual Walking Festival. The plaque is a permanent fixture at Blackgang Viewpoint car park.

Medehamstede Hotel
Contact us for our Special Offers throughout the rest of the year, including ...