The Needles are probably the most famous landmark and attraction on the Isle of Wight. They are a group of three jagged chalk rocks protruding out of the sea at Alum Bay, the most westerly point on the Island. There were actually four rocks originally, but the fourth collapsed into the sea in 1764 during a storm and the resulting stump is still visible during low tide. The name is thought to have been derived from this rock, as it was far more pointed in shape than the other three.

As The Needles proved to be a major hazard for ships that sailed up the Solent on their way to Portsmouth and Southampton, a lighthouse was built in 1786 on the cliffs above. However, because it was 462 ft. above sea level and the light was often obscured by sea fog, a decision was made to erect a new one in a more suitable location. This new lighthouse was built and became operational in 1859, where you can see it now, clinging to the edge of the most outermost rock. 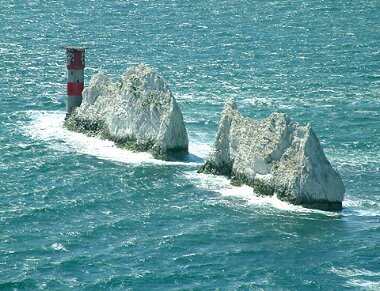 The cliffs behind The Needles at Alum Bay are also a famous visitor attraction on the Island as they are made from multi-coloured sands, which can be bought nearby. These celebrated sands first appeared on record in 1790 and the Victorians were the first to visit Alum Bay in large numbers. They used to arrive from the mainland by paddle steamer to view both the coloured sand cliffs and the stunning landscape. The Victorians were also the first to fill various shaped glass bottles with the natural coloured sand and to create sand pictures. 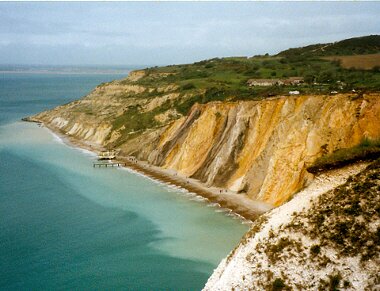