Churches on the Isle of Wight

AN EMERGING HISTORY OF CHRISTIANITY ON THE ISLE OF WIGHT

WHO WAS THE FIRST CHRISTIAN TO SET FOOT ON THE ISLE OF WIGHT?

We may never know who offered the first Christian Prayer on the Isle of Wight, but we can make a reasonable guess about what may have brought them here. Evidence of Roman settlements dating back to the 1st.Century A.D, have been discovered at several places on the Island. There is no clear evidence, to date, that any of the early settlers might have been Christian, however we do know from historical records that there were ´secret christians´ in the 1st. and 2nd. Centuries throughout the Roman Empire including Britain. The Roman Officer, Vespasian, came to the Island in the 2nd.Century and it is known that there were ´secret christians´ in his Army. Perhaps the first Christian prayer on the Island may have been by a soldier, many miles away from his home, for his family in another part of the Roman Empire.

SAINT HELENA & THE HOLY CROSS Historians tell us that Helena was born in Roman Britain, According to Leland she was the daughter of Coel, a British King who lived in friendship with the Romans. Constantius, at the time a senior officer in the Roman army in Britain, married Helena, and the future Emperor Constantine was one of their children. In 293 AD Constantius was honoured by the Emperor with the title of Caesar, and given charge of Britain and Gaul. In return for this honour he was obliged to divorce Helena and marry Theodora, the daughter-in-law of the Emperor.

Helena´s son, Constantine, made good use of his Father´s new power and position and gained positions of authority early on in his career in the army, He was so successful that eventually be was proclaimed Emperor, Constantine then proclaimed his mother Empress and struck medals in her honour.

After being divorced by Constantine, Helena became a Christian. She was renown for her holiness and also her care for those in need. The Emperor Constantine through the example and devotion of his mother, Helena, became a Christian and vowed to build a great Church on Mount Calvary, At the age of eighty Helena went to Jerusalem to supervise the building of the Church. During excavations three crosses were discovered, One of the Crosses bore a title and the marks of nails and miracles that followed the discovery led all to believe that it was THE HOLY CROSS.

Part of that Cross is now in the safekeeping of Holy Cross Church, Seaview. The Small Particle of wood in a silver locket is on view once a year at the church on Good Friday. This religious artefact may well be the oldest Christian relic on the Isle of Wight. By special arrangement it is from time to time made available to Churches of all denominations for very special events or services.

St. WILFRED - Apostle of the Isle of Wight St. Wilfred was born in Northumbria around 634 A.D. At that time there was no national King or leader; each area was ruled by a local chieftain who had complete control of the lives of his subjects. St. Wilfred was very keen that the new churches should be strongly united with the Universal Church so that they would not be totally dominated by each local Lord. Whilst returning from a journey to Rome Wilfred became very seriously ill, but he suddenly made a complete recovery following a vision of St. Michael the Archangel. St. Wilfred then went to Sussex where in 687 he converted the local chief, Cedwalla, and then with the chief´s support came to the Isle of Wight.

St. Wilfred is said to have landed not far from Brading (possibly somewhere in the area now known as Bembridge). He Baptised many at Brading and built the first Christian Church there.

The first Catholic Church ´on the hill´ at Bembridge is thought to have been named in honour of the Archangel who appeared to St. Wilfred and encouraged him in the Missionary work which brought him to this Island. 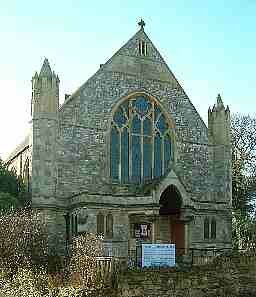 Church Book Agents Scheme. Many churches on the Isle of Wight have a book agent who serves their congregation by providing a selection of books & music on a regular basis. Any item can be purchased through an agent and your church receives 10% of the sale value. If you would like to know more, please contact the staff at Castlebooks on 01983 525885 who will be happy to help you.

Shanklin
Shanklin is one of the oldest towns on the Isle of Wight and is a very popula...

Ryde
Ryde is the largest town on the Isle of Wight. It is positioned on the northe...