Smuggling on the Isle of Wight

In Hampshire, the smuggler´s job was made especially easy by the proximity of the Isle of Wight. The Island had a well-developed trade in wool exports, and until the late 18th century, its coasts were only lightly guarded against the attentions of free-traders: any ship´s master with sufficient navigational ability would have been able to slip into one of the island´s bays or creeks with little risk of losing a cargo to the land-based forces. A chase at sea was perhaps more of a risk, but in the early 18th century, the smugglers relied on their superior seamanship to evade the preventive forces.

The south-east side of the island is fringed with treacherous rock platforms, notably Rocken End, and the risk of a wreck was not something that the master of a revenue cutter contemplated with pleasure. Any smuggler who knew a way through the rocks, and was prepared to ride out the ferocious south-westerly winds that batter this part of the coast was unlikely to be followed too far. 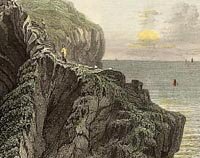 There seem to have been no large gangs on the island, and the free-trade apparently enjoyed the support of many of the inhabitants. To a certain extent this may reflect the fact that many local people despised rule from the mainland - until the end of the 13th century Wight had been an independent principality, and even at this early date, export smuggling of wool was already taking place on the island and the mainland. Little wonder that the islanders and were disrespectful of the customs authorities!

Smuggling yarns are widespread on the Isle of Wight; Rookley, situated at the epicentre of the Island, claims the crown as the smuggling capital. Chale on the south coast was the home of a notorious smuggling family called the Wheelers, who lived in Box Cottage and Chale churchyard had a reputation for other-wordly happenings that were probably deliberate scare tactics to keep nosey locals away from stored tubs. Bembridge was famous for its small boats that crossed to Cherbourg and Harfleur and the Bembridge windmill, which still stands above the village, served as a useful marker for incoming vessels. At Ventnor the museum of smuggling on the Isle of Wight history merits a visit on a rainy day - there is the usual stock of tableaux and replicas, and one or two items of genuine interest. The museum is in the grounds of the botanical gardens on the outskirts of the town.

THE CHINES
Coastal erosion has truncated many of the chines at the seaward end, and modern development has dissipated the essential character of others. However, the wooded slopes of Shankline Chine retain much of their original atmosphere, despite the tarmac path and entrance fee. When the chance of detection was slight, most free-traders preferred to land goods on the south-west coast of the island. Here there are a few more accessible landing points than the south-east, and they were all pushed into use: notable landing points were Blackgang Chine, Walpan, Ladder, Branes, Grange, Chilton, Brook, Shippard´s and Compton Chines, Freshwater Bay and Scratchell´s Bay. The chines in particular were valuable points of entry, because most featured a safe beach on the coast, and a secure path inland, hidden from view by dense brushwood and small trees.

COWES AND THE NORTH COAST
Cowes is at the northernmost tip of the island The south of the island had the advantage of being ill-policed, but the landing places there were really suitable only for small craft. Bigger ships had to travel round to the north side to unload. Here smuggling sometimes took a different form: East Indiamen would anchor in the Yarmouth Roads and openly do business with small boats that rowed out. By the 1780s, the smugglers had become quite brazen, and were ready to unload cargoes within sight of the preventive forces: they even formed convoys of small vessels guarded by a well-armed cutters and luggers (2-300 tons). Frequently two or three hundred men met the boats to unload the goods.

For more about smuggling on the Isle of Wight, view the link below:

Smuggling on the Isle of Wight