Sea Forts on the Isle of Wight

Since the Middle Ages, the seas around the Isle of Wight have been important from both the commercial and military standpoint. There has therefore always been a need to protect the area from foreign invaders. For this reason the coasts of Solent, Spithead & Southampton Water have seen the construction of a succession of military defensive structures. The position of the island made it an essential and integral part of any defence strategy for the region. So, Sea Forts on the Isle of Wight were deemed necessary.

In medieval times, Carisbrooke was the only fortification on the Island. It is an early 12th century motte and bailey built on the site of a late Saxon burh. Subsequent rebuilding, automation, repair and overlay have left us with a complex site which includes a range of medieval domestic buildings, a 14th century gatehouse, the ruins of an Elizabethan hall and kitchen, and Elizabethan outer defences. 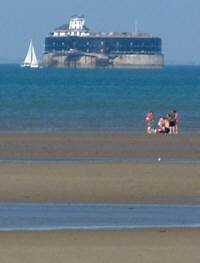 The earliest comprehensive defensive plan for the area was developed during the reign of Henry VIII as Portsmouth developed as a permanent naval base and in response to the threat of invasion from France. Sea Forts on the Isle of Wight were constructed at Sandown, East Cowes, Cowes and Yarmouth. Of these forts only Yarmouth survives in entirety, although the base of West Cowes Castle can be seen beneath the later building of the Royal Yacht Squadron.

Apart from minor changes, little was done to the Island´s defences until the mid-19th century. In 1852, Louis Napoleon (Napoleon Bonaparte´s nephew) assumed the title of Emperor of France; fears that he might emulate his famous uncle, combined with the growth of French naval power, prompted the building of further fortifications. Thus, forts Albert and Victoria were built in the mid-1850´s. A further invasion scare in 1859 coupled with a major advance in the effectiveness of artillery resulted in the construction of a series of fortifications throughout the region between 1860 and 1880.

The Needles passage and the entrance to Spithead were effectively blocked by shore-based batteries and, in the case of Spithead, by Sea Forts. Attention was also given to preventing landings on the southern coast of the Island. A new coastal road, known today as the Military Road, was constructed along the vulnerable south-western shore and barracks built at either end. In spite of the enormous cost involved in the construction of the various fortifications, none ever fired a shot in anger!

The Victorian Sea Forts on the Isle of Wight continued to be used throughout the late nineteenth and early twentieth centuries. Some remained as defensive structures and were modified for new weaponry. Others became training establishments. Most were abandoned by the mid-fifties but Fort Victoria remained in use until 1962.